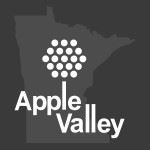 Dutch elm disease is caused by a fungal invasion of an elm tree’s water conducting vessels. Dutch elm disease is exclusive to elm trees and does not pose any risk to other tree species. Once disease symptoms are observed, tree death can occur in as little as a few weeks. When a tree detects the fungus, it responds by plugging its vessels to keep the fungus contained, but the fungus remains ahead of the tree and essentially the tree causes its own death by cutting off the water supply.

Elm bark beetles carry the disease spores from tree to tree as they feed in small branch crotches. Typically, Dutch elm disease first appears as yellowing and wilting leaves on a single branch in the upper canopy of the tree. Eventually, the wilting progresses down the tree and into the root system. As infected wood dies and dries out it becomes new breeding habitat for bark beetles. Eggs are laid under the bark where they hatch into larvae, feed, pupate, mature, and bore out to feed in other elm trees. Since these beetles have emerged from a diseased elm, they carry disease spores and spread Dutch elm disease, infecting trees they feed on. Dutch elm disease also can spread into nearby healthy elms through roots that have grown together between two or more trees.

Diseased elm wood must be processed through a wood chipper, properly covered in heavy plastic, or treated in another effective manner to control egg-laying habitats and beetle populations. Highly valuable elm trees may be protected with fungicide injections. View more information on Dutch elm disease. 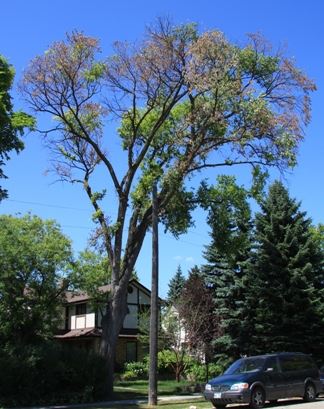